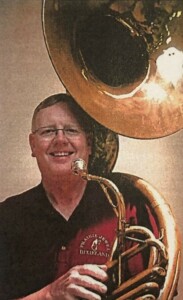 Due to the generosity of an anonymous donor, a fund was established in 2018 to help support children in the local Grinnell area with music funding assistance who are unable to afford music lessons, instruments and other items or therapy services associated with learning music.

The Vosburg Music Fund has been established in memory of the late Bill Vosburg who passed away in 2018. Bill was five years old when his family moved from Gilman, IA to Grinnell in 1955. Bill attended Grinnell schools and graduated in 1968. Music was a big part of his education as he played the tuba in band and sang in the choirs throughout his high school years. He attended Iowa State University where he participated in the ISU marching band. Upon graduating in 1971, he enlisted in the US Navy and served for four years during the Viet Nam war. After returning home, he worked in the family owned retail building materials business.

Bill was committed to the Grinnell community and served as a founding board member of Grinnell 2000. He would also later serve as president of the Grinnell Area Chamber of Commerce and the United Way board. Bill continued to play his tuba, entertaining at community events. He was a member of two Dixieland bands, the Grinnell College Symphonic Band, and also played every year with the Grinnell Community Band. In 1989, he collaborated with Dr. J.R. Paulson to design and build the Central Park gazebo, which became the bandstand for Community Band performances for nearly 20 years. He was invited to join the Iowa Military Veterans Band, which gives six to seven performances per year throughout Iowa, ending with a concert at the Des Moines Civic Center celebrating Veterans Day.

Give Now
Application/Reimbursement Form for Providers