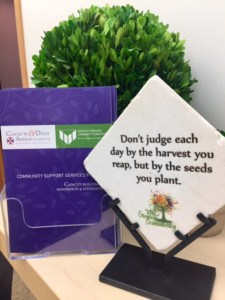 The Greater Poweshiek Community Foundation (GPCF) bestowed its four annual awards during an Oct. 8 event and added a new award to be given as appropriate. The event raised over $12,000 for the foundation’s Big Give Month, including an auction of two paintings created as attendees watched. Award recipients were Sig and Judy Barber, Lizzy Worthington, Doug Cameron, Grinnell Mutual Reinsurance’s Company and the Claude W. and Dolly Ahrens Foundation’s Community Support Services program which received the newly-created award.

GPCF Executive Director Nicole Brua-Behrens announced creation of the Art of Growing Community award, to be presented to an entity or individual in years when positive impact on the community is evident. She presented the inaugural award to Julie Gosselink and Shannon Fitzgerald for the Community Support Services (CSS) program of the Claude W. and Dolly Ahrens Foundation.

Gosselink and Fitzgerald proposed the CSS ten years ago to improve the local quality of life by fostering collaborations among community members and enabling non-profits to focus on their missions while CSS provided administrative services to those organizations, Brua-Behrens said. They convinced GPCF founder Tom Marshall of the value of CSS which created a close partnership between GPCF and the Ahrens Foundation.

Brua-Behrens thanked the two for their “incredible idea and the immeasurable impact it has had on our county, our partners and all the people and organizations they serve,” enabling both foundations and many non-profits to better achieve their missions.

Remembering they were “terrified” that the idea would not work or not be accepted in the early days of the program, Gosselink credited Marshall with recognizing the value of the approach and helping both foundations to collaborate for the benefit of the area.

“At the end of the day we all believe in the same thing, working to improve our communities and Poweshiek county,” Gosselink concluded. “By working together and bringing our missions together and making both our foundations more efficient, sharing staff and services and our office space, we’ve made this happen.”