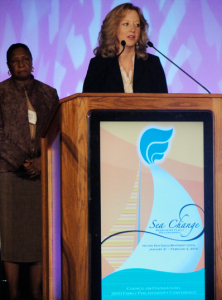 Critical Impact Award
Awarded by the Council on Foundations

In 2010, the Council on Foundations awarded the Claude W. & Dolly Ahrens Foundation its Critical Impact Award. This award is given to honor grantmakers who have supported innovative leadership, bold visions and significant impact in advancing the common good through effective grantmaking which can serve as a model for others in philanthropy. The foundation was selected based on the growth and success of its Community Support Services program, which aims to build capacity and promote collaboration among the local nonprofit community by optimizing back office support operations and to create efficiencies through shared staff and administrative functions.

The Council on Foundations is a nonprofit membership association of grantmaking foundations and corporations. Members of the council include approximately 2,000 independent, operating, community, public and company-sponsored foundations and corporate giving programs in the United States and abroad. The assets of the council members total more than $300 billion. The council’s mission is to provide opportunity, leadership, and tools needed by philanthropic organizations to expand, enhance, and sustain their ability to advance the common good.